Young people from Chorley Youth Zone’s young people’s development group are doing their bit for the local community whilst feeling inspired by the great outdoors after their recent involvement with clearing up along Chorley canal.

Working in partnership with the Canal & River Trust, the group have engaged in a number of projects based around the canal in support of the charity’s ‘Desmond Family Canoe Trail’, a five-year project due to finish in 2020 which aims to get around 2,000 young people involved in creating the country’s first ever coast to coast canoe trail, travelling 162 miles from Liverpool to Goole along the Leeds & Liverpool Canal.

Kiean Murphy, age 11, who was involved in litter picking along the canal, sanding and painting benches and making the canal and pathway look more presentable said:-

“This is the first time I’ve been to the canal, I really like it. I’ve never been canoeing before but as a reward for our hard work we are going canoeing on the canal, I’ve been really looking forward to it!”

“We’ve had a great response to the project in Chorley and the partnership with Chorley Youth Zone has been a definite highlight. The young people worked really hard to complete several tasks along the canal in time for Canal Fest at Botany Bay. It was great to see the group celebrating their hard work with a canoe session afterwards.

We’re keen to continue to work with Inspire Youth Zone in the future and help even more young people from the Chorley area to get active outdoors and enjoy their local canal. Get in touch via our website to find out more about getting involved.”

“We have made great links with the Canal & River Trust, and hope we can engage many of new our members with the Desmond Family Canoe Trail when the Youth Zone opens in early 2018.” 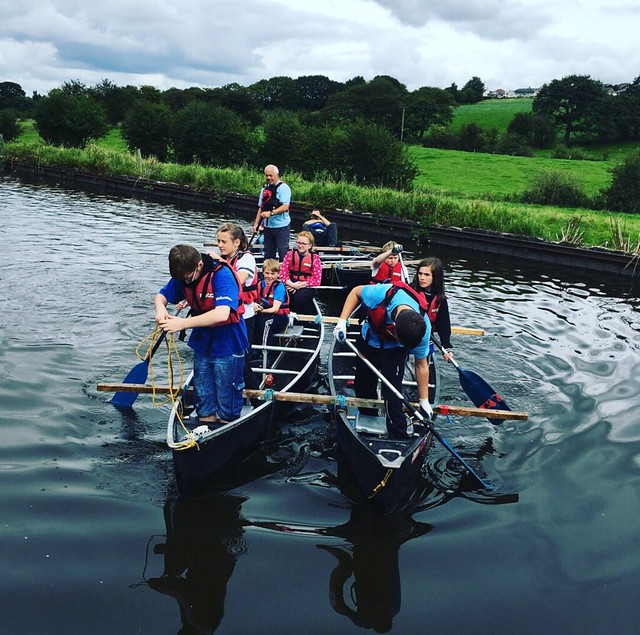 Alongside working with representatives from the Canal & River Trust, Chorley Youth Zone’s young people’s development group have been showing their support for the town’s annual Canal Festival. The group were responsible for putting up posters and giving out leaflets to promote the festival in town centre, whilst at Botany Bay, they put up buntings in preparation for the event.

Young people from Chorley Youth Zone’s development group have been involved in various community project whilst their brand new Youth Zone is currently being built. Expected to open in spring 2018, headed by Chairman Andrew Turner and named ‘Inspire’ by local young people, will be a place where young people can reach their full potential, grow their dreams and achieve their goals.

The Youth Zone, currently being built on Chapel Street in the centre of Chorley, will offer a wide range of activities for thousands of young people aged between eight and 19, or up to 25 for those with a disability, including; dance, sport, music, media, employability and mentoring programmes. Inspire will cost young people just £5 per year and 50p per visit.

The project is being run in partnership with Chorley Council, Lancashire County Council, The Arts Partnership and OnSide Youth Zones.